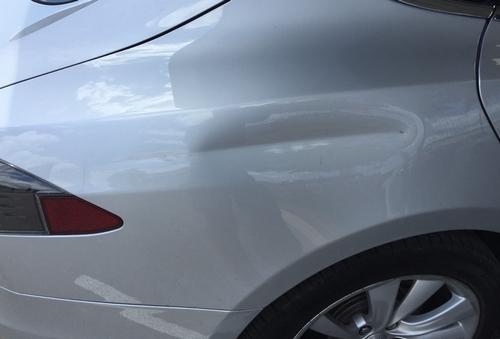 There are a lot of people buying Teslas these days now that there’s a more affordable option in the Model 3.

It’s a sweet car. All Tesla cars are nice. Electric is cool. Once you go electric, you’ll never go back.

But if you’re on the fence and want someone to talk you out of it, here are 5 reasons to not buy a Tesla, coming from someone who has owned a Model S for three years.

It’s going to a while before we understand how much it costs to fix a Model 3. But when it comes to body shop work on a Model S or Model X, it’s really expensive.

Take a look at the picture at the top. Some unfriendly person hit our car in a parking lot and didn’t leave a note. It left quite a dent but only on one panel. Take a guess at how much it cost to fix this.

(On the plus side, general maintenance isn’t necessary.)

Our insurance covered the hit-and-run. But the cost of fixing a Tesla means that insurance is very expensive.

The insurance cost wasn’t bad when we first bought our Tesla. But premiums soared as insurance companies figured out the cost of fixing these vehicles. As my agent tells it, they’ve had to total cars that normally would cost $20k-$30k to fix. And then there are the dings and bumps that would cost a few grand to fix on most cars that cost $10k.

Be prepared to shell out a lot of money to insure your Tesla.

3. It takes forever to get parts

Body shops have only one source to get Tesla parts: Tesla itself. The same goes for fixing things at a Tesla service center.

This means it can take a long time to get a Tesla fixed.

Case in point: a rock hit our windshield and we need to get it fixed.

On most cars, this is something that can be fixed within a couple of hours by a mobile installer. But you won’t find many windshield companies that can do Tesla windshields. We had to get it through Tesla and it took two weeks to get it in. Oh, it also costs $1,300. That’s a lot more than most luxury cars.

4. Service centers are in disarray

Tesla is still trying to figure out how to service cars. You have to wait a long time to make an appointment and then service is slow.

I dropped my car off yesterday afternoon for the windshield replacement. They are also swapping out the HomeLink module that failed. I figured they could turn it around that afternoon. Instead, they informed me it would probably be two days! It’s because they’re so backed up. I’d rather have them tell me to bring my car in when the mechanics will be able to do the work.

In the early days, they used to give you a Tesla loaner. Those days seem to be over because they are selling all available cars. Now they’ll get an Uber for you or a rental car, but rarely a Tesla. Most premium car brands give you a loaner in the premium brand.

5. Owning a Tesla comes with the same headaches your phone has

You know when your phone gets a software update and things break? Or the user interface changes and you have to re-learn how to do simple tasks? That’s what owning a Tesla is like.

On the one hand, it’s cool that Tesla can push updates to your car. On the other hand, these updates often break the car.

Earlier this year one update had a bug that caused your dashboard to frequently reset while you were driving.

Yes, while you were driving!

It took a couple of weeks to push out a fix.

Tesla released an entirely new user interface a couple of weeks ago. The timing wasn’t smart since Tesla support was already overwhelmed with new Model 3 buyers.

The interface takes a lot of getting used to. But it also took out one of the safety features that many people use–the ability to keep a rearview camera at the top of your screen while driving. Tesla pushed out a fix for this within a couple of weeks. Yet it strikes me that Tesla doesn’t really understand how people are using its interface. If it did, it wouldn’t have removed the rearview camera option in the first place.

OK, if you have the money, buy a Tesla. All of their cars are awesome. Just be aware that it won’t be a panacea.